MAGIX Movie Edit Pro is professional movie editing software for Windows users. It provides you with a range of unique, high-quality plugins for professional video effects. It could quickly and easily edit you can edit your videos for vacation, family celebrations or live show. It can import various video formats like AVI, DV-AVI, MPEG-1, MPEG-2, MPEG-4, MTS, M2TS, WMV(HD), VOB, MKV, etc. However, if you want to edit a video that was shot using a camera with MXF / P2 files, you will have problems for importing the files into MAGIX. MAGIX Movie Edit Pro has no native support for P2 MXF footage, so you will need to convert P2 MXF files for editing in MAGIX Movie Edit Pro.
To convert P2 MXF files, Aunsoft TransMXF is a good choice. It could quickly and easily convert MXF/P2 MXF files into various other video formats workable for MAGIX. It provideos HD video formats for AVI, MPEG-2, MPEG-4, WMV, VOB, MKV, MOV and many other video formats. With this MXF to MAGIX Movie Edit Pro Converter, you are able to edit P2 MXF in MAGIX with ease. You may know about other MXF converters, but some may lead to problems about output video and audio when transcoding P2 MXF clips. With Aunsoft TransMXF, you will get output videos with perfect video/audio synchronization.Simple Steps to convert P2 MXF files for editing in MAGIX Movie Edit Pro1. Import source P2 MXF files into MXF to MAGIX ConverterFree download trial version or buy full version of Aunsoft TransMXF, install and run it. Click "Add video" to load in the MXF files you want to convert. Double click the file you want to preview.2. Choose output format for importing into MAGIX Movie Edit Pro.Click the drop-down list of "Format", where you can choose "HD Video"→"MPEG-4 HD Video (*.mp4)" or other HD video format workable for MAGIX Movie Edit Pro. Then, click "Output" to select a directory to save your converted files. 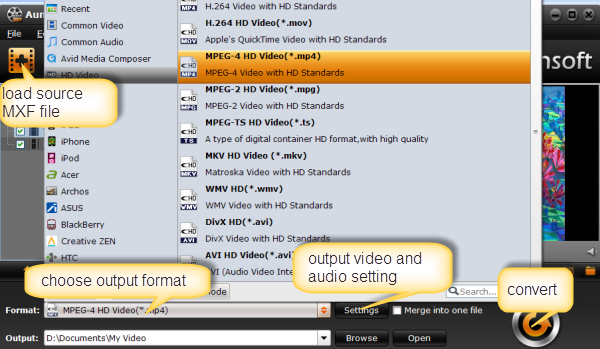