Watch 2014 blu-ray/bd movie on iPhone 5S? iPhone 5S is the best phone with 4-inch Retina display, fingerprint unlocking, 8MP Camera; True-Tone LED flash, A7 Dual-core processor as well as Aluminium body. Cameras have become so important on mobiles that there are now some, like theNokia Lumia 1020 and Samsung Galaxy Zoom, which are more camera than phone. I’ve found that the iPhone 5S’s camera to be very solid, it is perfectly suited for snapping and reacts quickly. There are many Blu-ray movies available and new movies are being released continuously, you want to rip 2014 blu-ray movies to iPhone 5S? This tutorial will show you how to rip Blu-ray movie to iPhone 5S in the simplest way. Aunsoft Blu-ray Ripper is a popular blu-ray and DVD conversion program. It is recognized as the only blu-ray software converts without audio and video missing issues. With it, you are able to play both blu-ray and DVD to variety of mobile devices including Apple iPhone 5S, iPhone 5c, Samsung Galaxy Note, HTC One mini, Lumia 928, iPad mini, iPad air, galaxy tab, Xperia Z1, ATIV One 5, HTC Butterfly s, and etc. What’s more, this powerful blu-ray ripper can easily convert Blu-ray to MP4, AVI, WMV, MOV, FLV, 3GP, MP3, F4V, Divx, and etc. 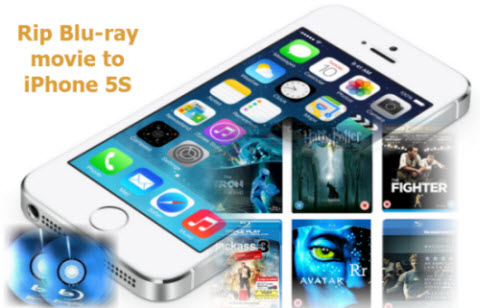 Step 1, Download Aunsoft Blu-ray Ripper and install it on your computer. Step 2, Insert a Blu-ray disc into Blu-ray drive, the ripper will automatically load the disc information. If you can't find the disc, you can click Browser. Step 3, Specify the output format and profile. Step 4, Check the title and audio track you want to rip and select iPhone 5 as Profile. Last, Click convert to commence the Blu-ray ripping to iPhone 5S. Of course, you may preview the video before conversion. You will get the ripped movie in a high-speed way.