An all-in-one tool to convert all videos, decypt/copy/rip Blu-ray and DVD with high quality.
$65.00

The audio video sync issue often happens during MTS to FCP conversion, especially when you record video and audio separately. If you want a solution to convert MTS to Prores LT with audio video sync for FCP7, this article will be helpful."The problem I’m having is that when I convert from MTS to Apple ProRes 422(LT), the video becomes badly out of sync. There is a clip where the clapper board is clapped twice within a few seconds on my timeline in FCP7, when I mark the time between the two claps on the video track in is 7 seconds and 3 frames, but the time between the two claps on the audio track is 6 seconds and 16 frames. This means that the audio is extremely out of sync as time goes on."Some guys who have experience on Clipwrap or Handbrake will be no strange to this condition. Free conversion tool is good, I mean, in most cases. However, many converters lack power to avoid audio out of sync when converting MTS to Apple Prores. Adopting advanced audio and video synchronization technology, as well as unique video encoding technology, Aunsoft iMedia Converter for Mac, is the effective and efficient solution to transcode MTS to Apple ProRes with audio and video sync. The program can keep perfect synchronization only if the source files are with video and audio in sync. As a multiple video formats supported converter, iMedia Converter for Mac can also supports importing MXF, VOB, TOD, EVO, SWF, etc. The output formats are more than 50 types for different players and editing systems. Nearly all kinds of video to video and video to audio conversion can be achieved on Mac. Below is a 4-steps tutorial to transcode MTS to Apple Prores with audio and video sync for FCP7. Step1. Import MTS filesClick "add video" or "add folder" to load source file. You can also directly drag files to the program. No matter the HD camcorder 1080 60p/50p, 1080i AVCHD MTS/M2TS, 720p AVCHD lite files you import to, you won't worried the output format will be out of sync after conversion.The program supports batch conversion and allows you capture images. 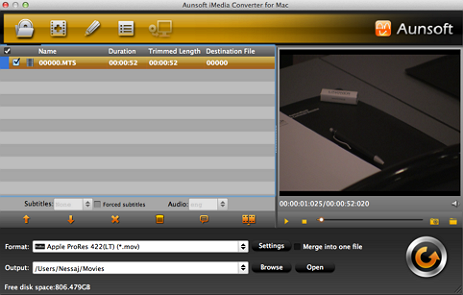 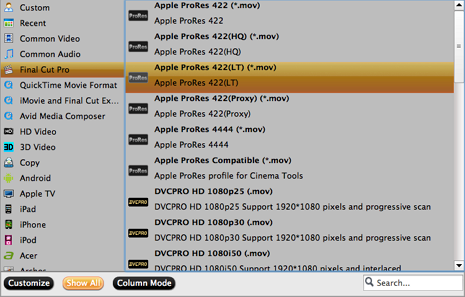 Step3. Preset video and audio profile. (Optional)You can click "Settings" to set up video size, frame rate, bitrates and other settings. Step4: Conversion.Click "Conversion" icon that the iMedia Converter for Mac will transcode MTS to ProRes LT with audio video sync. With just a click on "Open output folder", you can locate the export MOV quickly.