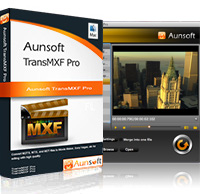 Mix into one track

Want an ultimate MXF Mixing solution for your P2, MXF camcorders? TransMXF Pro for Mac is a professional MXF mixer which helps you combine all or selective MXF audio channels into single one for outputs. The sample rate and channel settings allow users to choose such as mono, stereo and 5.1 channels. It’s suggested that you preview the MXF video before conversion so as to ensure whether your original source video has sound.

Preserve and export with audio channels, streams in MXF file

TransMXF Pro for Mac lets users to import, keep and export with original audio streams in MXF file. Exporting Multi-track audio becomes very necessary for film editor. If you are working with an XDCAM, MXF workflow on workstations with CS5, you will export the project which has multiple channesl of audio, to XDCAM HD 422 Codec, keeping each audio track in your original track.

Unable to import or ingest MXF to Avid? Can not import even with AMA or any plugins? Aunsoft TransMXF Pro for Mac made it easier to bring MXF to Avid, iMovie, Final Cut Express editing system by corresponding codec and format.

Merge into one file: combine MXF files into individual one file

Want a piece of software to convert MXF in batches? TransMXF Pro for Mac is an ideal choice. After dragging and dropping MXF to this program, you just click the option of merge into one file to concatenate many different MXF clips into one large file.

Easily click the video editing tools, including trim, crop, text watermark, image/video watermark, effect, audio editor, deinterlace and subtitle. Moreover, smart editing bar allows you to rotate, flip videos, stop and play video files. The editing effect is visualized by both original preview and output preview windows in order that you can edit till you are satisfied.

Customize Profile settings and properties or by default

The MXF program offers the default parameters with the best settings including codec, frame rate, bitrate, size, sample rate, channels and etc. You can also adjust them or customize your presets, for example, you want to improve the bitrate quality when ProRes exports.

Shut down computer after conversion

To enable this option, the computer will automatically power off. It is an useful feature for anybody who has a bunch of MXF project files to convert overnight and don’t want his computer to stay all night after completion.

TransMXF Pro is also an ideal program for beginners thanks to its intuitive interface, simple and efficient conversion steps. Using the advanced audio and video syncronization technology, TransMXF Pro for Mac helps to avoid the audio missing or stuttering issues.